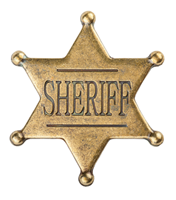 (1) No provider or user of an interactive computer service shall be treated as the publisher or speaker of any information provided by another information content provider.

Townsfolk peer through the curtains as hot dust licks the boots of the town marshal, squared off with Black Bart, the Bar-D ranch baron.

Now rewind in your head.

Put Mark Zuckerberg under that flat-crowned black Stetson. Zuckerberg: “People want to know that companies are taking responsibility for combatting harmful content — especially illegal activity — on their platforms...Changing [Section 230] is a significant decision. However, I believe Congress should update the law to make sure it’s working as intended.” (source: Zuckerberg testifying before Congress, October 28, 2020. Not my favorite screenplay)

There’s a recurring pattern to change. When a new frontier opens up, some people head there to try building and creating, free of the old rules. Pirates. Cattle barons. Entrepreneurs.

It’s axiomatic that we don’t know in advance what the basis of wealth or power will be for empires carved out of a new frontier. Most unconsciously assume the existing structures of value and power will apply to the new space. A few – the pirates and entrepreneurs – have the vision and/or instinct to see that the temporary freedoms of a new frontier give them both space and license to discover or create new forms of value and power.

Then, as historian Debora Spar points out, successful pirates start demanding law and structure and order to preserve the empires they built. (source: Ruling the Waves: From the Compass to the Internet, a History of Business and Politics along the Technology Frontier, Debra L. Spar, 2003)

But now that he’s got the big ranch, Zuckerberg seems to be thinking that some barbed wire around his borders – and rules to enforce the wire – might be helpful. (I’m just using Facebook as a convenient proxy for this conversation, although I do find them particularly exemplary of the issues.)

I think online has passed the frontier stage; the “big ranches” are evident from a glance at the stock exchanges. Countries are talking about rules and regs, monopolies and taxes. Even Section 230 – “twenty-six words that created the internet” – is up for debate. Where does email fit in this conversation?

There was a brief discussion thread on OI several weeks ago about MailChimp’s standard terms-of-use addition: “Mailchimp does not allow the distribution of Content that is, in our sole discretion, materially false, inaccurate, or misleading in a way that could deceive or confuse others about important events, topics, or circumstances.”  I posed the question, do ESPs sail in the safe harbor of Section 230? There wasn’t a definitive answer.

Not being qualified to offer a legal opinion about that, I do think discussion of email, “the frontier”, and discussions of rules and law for online are interesting and timely.

Two court cases from the 1990s lead to this section of the CDA. The Federal Court of NY ruled that CompuServe was not liable for content on its forums because it didn’t moderate the forums in one case. In a separate case, a NY state court ruled that Prodigy could be held legally responsible because it policed some posts.

“Mailchimp does not allow…”

That looks more like “policing some posts” than “didn’t moderate forums.” MailChimp has decided to exercise their (sole) discretion about what’s true, what’s accurate, and leading vs misleading.

To be clear, I’m not arguing with their decision. MailChimp is a privately owned business; deciding what they’ll allow to be sent through their platform is up to them. It’s the kind of self-policing that the authors of the CDA (a bi-partisan bill from then-Congressmen Chris Cox & Ron Wyden) had in mind.

In the spirited discussion about this on an OI Zoom conversation some weeks back, someone made the point that email is different. If MailChimp doesn’t allow the content you want to send, you can change ESPs and use another.

That’s one of the key distinctions about email, compared with most other online channels. There isn’t a “big ranch”, a dominant player — at least on the sending side. MailChimp is the biggest by any number of measures, but they’re not getting hauled into Congressional hearings.

Here’s the thing to think about, though.

While (as far as I know) no ESP or email-related service has had to use the ‘safe harbor’ of Section 230 in a suit, that doesn’t necessarily mean that changes in Section 230 would have no effect. Policy is an awfully blunt weapon. The handful of ‘usual suspects’ at Congressional hearings don’t include an email-industry exec.

Consider the effect of a complete repeal of Section 230 on email. Would that open the door to someone suing MailChimp for a message sent through their platform? “That message falsely accused us of X; you claimed sole responsibility for determining falsehood, and missed that message, so you are responsible.” Perhaps that’s unlikely, but it’s a fairly chilling notion.

Put that another way for emphasis. How would email have looked had Section 230 never existed? It’s not difficult to imagine that somewhere in the early days of email marketing, some knucklehead would have sued the email deliverer for the email delivered. Like I said – chilling notion.

I’m relatively new to this space, but it seems like email has been pretty darned effective at the self-policing regulatory approach. Despite that, a regulatory scheme designed to curb broad online issues (and address social-media headlines) could all too easily make a bit of a mess for email as a channel and an industry. When you see Section 230 and other Internet regulatory discussions in the headlines, it’s not just about “those other guys.”

The question I’d leave hanging from this post for discussion is, does email have a seat at the table as laws and policies for the online domain grow?  What avenues and options are there for representation?

OI members are encouraged to reach out to me for the dial-in information.

If you’re not an OI member but would like to attend, I do have a few spots for guests – email me directly at jeanne@onlyinfluencers.com with your name and company, if you’re like one.